For more than two decades, Sharon Kleyne’s research and new water technology discoveries at the research center she founded, Bio-Logic Aqua® Research Water Life Science®, have garnered international recognition for her as the global expert on dehydration of the eyes and skin due to excessive evaporation of the body’s water vapor. “The moment we leave our mother’s water-womb and are born,” Kleyne says, “we begin a process of evaporation that continues until death. In order to sustain excellent health and live longer,” Kleyne continued, “one must supplement eyes and skin on a daily basis to replenish the evaporating water vapor.”

Registered Dietitian Kathleen Blizzard MS, RDN, CNSC and CLT (www.kathleenrd.com) couldn’t agree more. Blizzard is an enthusiastic proponent of Sharon Kleyne’s Water Life Science® lifestyle. “I learned about water early,” Blizzard said. “As a child, I suffered gastrointestinal illnesses and I had a terrible case of dry eye disease, which led to my first pair of glasses at age two. With these health issues and growing up in Iowa,” Blizzard went on, “I learned about the importance of drinking eight-to-ten glasses of water a day. I believe that really helped my intestinal issues.” After completing her education and establishing her practice, Blizzard, a lifelong athlete, discovered that she was slowing down but didn’t know why. She went in, she explained to Kleyne and radio listeners, for a series of tests, The results shocked her. They said she was diabetic and was very low in magnesium and zinc. “It was at that point,” Blizzard said, “that I realized I needed more micro-nutrients in my diet. I had to change the way I ate!”

To Sharon Kleyne’s questions about the steps she took to take charge of her personal health, Blizzard said that she cut out all processed and packaged foods. Formerly a vegetarian, she shifted to a high fat, low carb diet, and in no time at all she was energetic and fitter. “I believe,” said Blizzard, “that nutrigenomics is one of THE greatest health-optimizing skills on the planet, and everyone needs to learn it.” That is why Blizzard now devotes so much of her time to helping others grasp the benefits of the nutrigenomics system.

“And I know you’re also teaching people how to balance the system with correct breathing and water consumption, plus misting of the eyes and skin,” Kleyne added,

“Absolutely!” said Blizzard. “If you don’t replenish the water vapor you lose to evaporation, you will not be a well person.”

Sharon Kleyne, America’s leading water educator, researcher and advocate and host of her nationally syndicated radio program, The Sharon Kleyne Hour Power of Water, Global Climate Change and Your Health on Voice of America to loved that Blizzard stressed the importance of education in these health matters. “I discovered long ago that one can accomplish very little without education,” said Kleyne. “I try to educate people around the world every day about the growing global water crisis, and the health dangers associated with dehydration due to excess evaporation of the earth’s water vapor. In doing so,” Kleyne said, “we learn what we need to know to create a new, healthy Water Life Science® lifestyle.” Kleyne encouraged listeners and other interested parties to visit http://www.biologicaqua.com for more information about this new water technology and water lifestyle.

Sharon Kleyne, water vapor evaporation expert and Water Life Science® advocate, works hard every day to educate people around the world about the perils of water vapor loss and the need to supplement one’s eyes and skin several times a day with Nature’s Tears® EyeMist® and Nature’s Mist® Face of the Water®. “They’re still the only Trade Secret tissue culture grade water products. Without additives, to treat over-evaporation and dry eye disease on the planet,” said Kleyne. Kleyne, host of The Sharon Kleyne Hour Power of Water, Global Climate Change and Your Health radio program, is a tireless advocate of water research and education; she is also a staunch supporter of healthy practices and habits, including diet.

Like most leaders in holistic health and advanced research, Sharon Kleyne encourages appropriate diets that include lots of vegetables, fruit and water. Nuts, whole grains and some grass-fed beef (occasionally) are also encouraged. But if you want to ‘go vegetarian’ yet you like meat, Kleyne suggests that you try one intriguing alternative that is rapidly catching on.

After years of research and development, Impossible Foods, a four-year-old company in Redwood City, California, is launching its plant-based burger—and early reviews are amazing. Impossible Foods principle scientist Rachel Fraser explained the company’s thinking: “We wanted to look at what is meat and look at it in a way that no one has looked at it before and break it down into all the molecular components that make up meat and try to understand what makes meat meat.”

“It looks like they’ve done a good job,” says Sharon Kleyne, founder of Bio-Logic Aqua® Research Water Life Science®. “The company hired chemists, engineers, molecular biologists and a director of protein discovery to work on this product.” The result looks like beef, and even more to the point, it tastes like beef. It tastes a lot like beef. In fact, if you didn’t know the difference, you might not be able to distinguish between a beef burger and this plant-based substitute. It’s healthy, too. The Impossible Burger provides all of your essential amino acids and B vitamins, as well as about six grams of protein.

The burger itself consists of elements that have always been used to make vegan ‘meat’ products—soy, wheat protein, water and some salt—with one very important addition: heme. Heme is a prolific substance in animal muscle tissue. It carries oxygen to our blood, and it makes the meat red. Meat can also thank heme for its tangy, bloody taste that carnivores around the world love. Now, Impossible Foods researchers have discovered that heme can be found in another source—the roots of soybeans. But rather than impact the landscape by harvesting lots of soybeans, scientists at Impossible Foods succeeded in taking the genetic sequences that make up heme in soy plants, then reproducing it, molecule by molecule, in the lab.

“But what may be the best news of all,” says Sharon Kleyne, “is the fact that an Impossible Burger uses three-quarters less water to make than a cow burger, thus saving precious water resources. So,” Kleyne continues, “if you want to cut down on or eliminate your meat intake while still enjoying the taste of a burger, give these new burgers a try.” Kleyne adds that everyone should, of course, still drink 8 to 10 glasses of water each day, and drink a whole glass (no sipping!) at a time.

According to Stuart O’Neill, people are more likely to make healthier food choices if they understand where food comes from and the difference between naturally grown foods and commercially processed foods.

O’Neill works with an educational and volunteer program, based in southern Oregon’s Rogue River Valley, called the Rogue Farm Corps. He was interviewed on the Sharon Kleyne Hour Power of Water talk radio show of April 30, 2012. On the same show, Sharon Kleyne also interviewed Tracy Hardy of the Rogue Valley Farm to School Program.

The Rogue Farm Corps is a non-profit farm education and training program. The Farm Corps’ training program, called the Farms Next Internship Program, is dedicated to training young farmers in organic, sustainable agriculture. O’Neill notes that this type of experience is important because only 1% of the US population participates in commercial agriculture.

In the Farms Next Internship Program, students live on a host farm for a season, during which they participate in all aspects of the farm, tour other farms and attend classes organized by Rogue Farm Corps.

Stuart O’Neill and Sharon were surprised that only 1% to 2% of food sold in Rogue River Valley supermarkets are locally grown. Local food crops include fruit and vegetables, meat and dairy and a few grains. The valley’s largest agricultural crop is hay. Other major crops include pears, gladiolas, beets and turkeys.

O’Neill noted that the Saturday Grower’s Markets in the Rogue Valley communities of Grants Pass and Ashland are extremely popular and that a few growers are able to earn a living exclusively through these markets.

Tracy Hardy of the Rogue Valley Farm to School Program also expressed concern to Sharon Kleyne about the importance of making sure children know from where their food originates when purchased in stores. Like Stuart O’Neil, she believes in the importance of consuming locally grown food whenever possible because local foods better adapted to the nutritional needs of local residents (and require less fuel to ship). Her program sponsors summer camps and school field trips to local farms. It is attempting to enlist a participating farm in each Rogue Valley community.

Sharon Kleyne and Tracy Hardy agreed that childhood obesity is a national health crisis and that nutrition education, and being aware of food choices other than fast foods and sugar drinks, are crucial to fighting the problem. Rogue Valley Farm to School is a leader in attempting to persuade local school districts to purchase more locally grown foods direct from the farms for their school lunches.

Sharon Kleyne reminded listeners that, “What you put in your mouth determines your health. Natural, healthy foods are not expensive and fresh vegetable produce costs less than prepared foods (although fresh produce is becoming more and more prepackaged and may be imported from Mexico or Chile in the off-season). Either way, medical care, the frequent result of poor food choices, is a lot more expensive.

And, of course, Sharon Kleyne urges everyone, as the first step towards good nutrition, to drink eight to ten glasses of pure water each day.

A widely accepted belief, in the United States in recent decades, has been that “Natural foods are always good for you.” Global water and nutrition advocate and educator Sharon Kleyne recently cautioned that this belief is not always true and that not all natural foods are good for everyone.

To Kleyne, the key to good personal nutrition is proactive personal education. It is especially important, says Kleyne, to carefully research (both pro and con) fad diets and very limited diets, before undertaking them.

People whose ancestry originated in the Arctic, Kleyne notes, tend to have a very high tolerance for fat and animal protein and a completely vegan diet might not be as well suited for them as the same diet would be for somebody else. 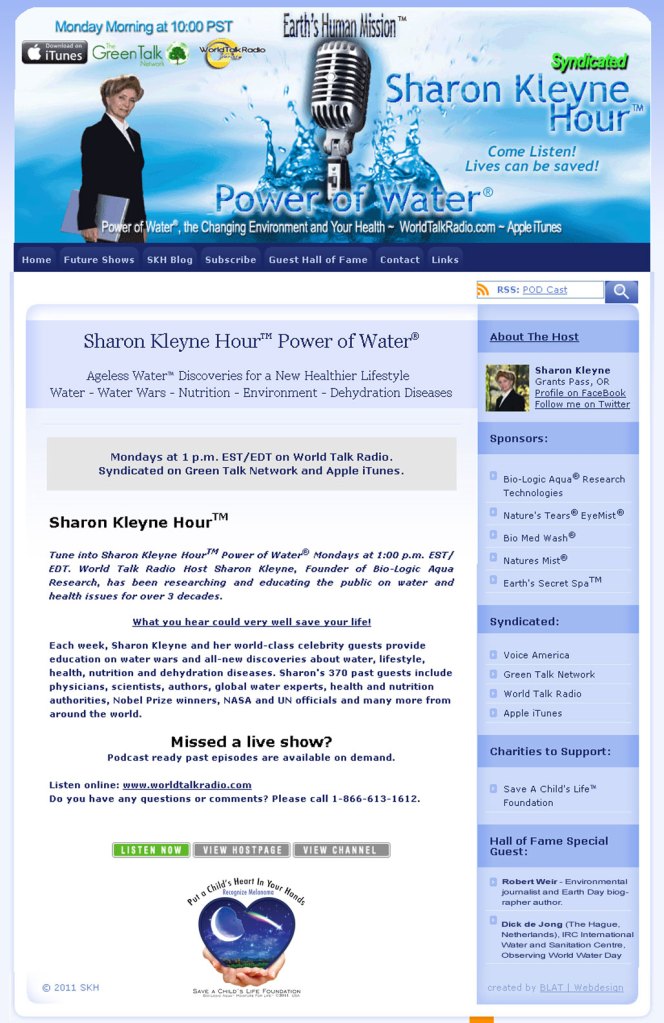 Melvin H Kirschner, MD (Granada Hills, CA), physician and author. “The state of the medical system in the U. S. and how it can be fixed.”

Dr. Kirschner worked for the California Health Department checking the drinking water supply and concluded that it was terrible! He is 84, started in public health and then moved to Family Practice medicine.

The doctor’s primary concern is formulated medications, which he believes are over-prescribed, have too many side effects and are essentially all poisons. Sharon and the doctor agreed that we must be proactive about medications and not take automatically take everything that is prescribed. This involves self-education, informed decision making and seeking a natural cure before a formulated cure.

That is the also purpose of Sharon’s new www.NaturesPharmaFirst.com website. END_OF_DOCUMENT_TOKEN_TO_BE_REPLACED

Sharon Kleyne, about to enter her thirteenth year as host of the nationally syndicated weekly talk radio program, The Sharon Kleyne Hour Water Life Science®/Nature’s Pharma®, The Power of Water® & Your Health sponsored by Nature’s Tears® EyeMist® on VoiceAmerica produced by Rose Hong, founder/director of Global Dragon TV in Washington, D.C., teaches that “we on this planet forget that everything starts with water."